Come and see us: Two Flutes and a Flirt, Christmas Spectacular!

I am very excited! Next Sunday, 23rd December, from 5 to around 7:30PM, I am playing in a little show at the historic Phoenix Artist Club, with a couple of friends (Nicky Bolster and Colin Savage) in our group, dubbed “Two Flutes and a Flirt”. We have been playing together for quite a few years now, and I always look forward to getting together with these people as they are such multi-talented and entertaining company. 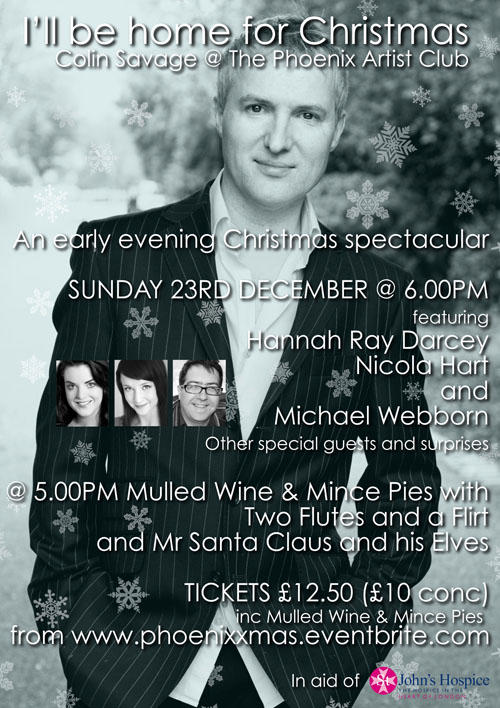 The gig is billed as “an early evening Christmas spectacular”, and promises to score very high on the “enjoyability scale”! The club is on Phoenix Street near Charing Cross Road, and the event has been timed to happen at the end of one of the last shopping days before Christmas, with family-friendly activities happening in the first half – indeed, Father Christmas is rumoured to be putting in an appearance in the first hour. Mulled wine and mince pies will be served to the dulcet accompaniment of our above-named group, playing a selection of light tunes.

The second half, more of a sit-down affair along the lines of a musical show hence still open to well-behaved children, boasts a range of performances and features from contemporary artists and performers including Hannah Ray Darcey, Nicola Hart and Michael Webborn – plus some other surprises, no doubt. Think west-end musical style, perhaps?

The event is being put on in aid of charity, supporting St John’s Hospice. Tickets are available at the door at £12.50 (or £10 for concessions), but numbers are limited so you might want to book them in advance to be sure you get in.

This evening, in rehearsals, we were sounding pretty good, and I don’t think that was just because of the gin and tonics we were drinking!

Anyway, if you like the sound of this and fancy coming along to enjoy some great entertainment at this splendid private club, I might well be convinced to buy you a drink too..! Come on, you know you want to…

This site uses Akismet to reduce spam. Learn how your comment data is processed.

← Kitten-Gate: a walk on the wild side!
The Phoenix Artist Club: great venue, Christmassy fun! →

It's true. I WOULD rather be running.

A few inane words on my quest to become fit and unfat again.

Saving the world one run at a time

The Musings and Mutterings of a Marvellously Mad Mummy!

Flowing Yoga in and around Amersham

There Is Another Way
Once and Future Runner

Once a runner, always a runner.